This weekend was a tough one. I had to arrange the OS tournament at BSK in Sweden and be at Uthden Troll Cup in Leeuwarden, Netherlands at the same time. But in the end, I enjoyed both tournaments and I will focus on BSK as I guess a lot more people will cover UTC.

The OS tournament at BSK has been declining since it lost its shark and I think last year was the least amount of players in many year. I covered that one on this blog as well. It's a weird one, it's arranged in a school building with other Magic tournaments, card games, role playing games, board games and general nerd stuff. It's quite sober as you are not to allowed to drink inside (school building, underage kids and beer don't go together in the Swedish society). But with that said, it's a tournament where you meet people you don't otherwise meet, and no drinking (except outside between rounds) makes the tournament unique in a way. I like it.

This is the second year I'm arranging this tournament and I apply my own style of awarding prizes. Traditionally first place got an All Hallows Eve but that is too expensive, so Svante changed that to a The Fallen instead. This year I added the second-place prize, Scavenger folk aka Pölsemannen (the sausage man). I also got some prize cards for the participation fees:

9th place a Paralyze from Beta

13th place an Island from Beta

Last Place a Fellwar Stone from The Dark

This year we managed to gather 27 wizards, including a guy who showed up two hours before the tournament to a bar and wanted to borrow a deck. Of course, Tibia had a deck box full of black spells to make a deck! It's fun to see people that started playing Magic in 2019 and never played OS have an interest in the format. I also borrowed a deck to a good friend and convinced him it was a good choice in the format. The tournament started with a bit of delay, mostly because of the Indian restaurant we visited before the tournament. But hey, no OS tournament can start when it's supposed to start. 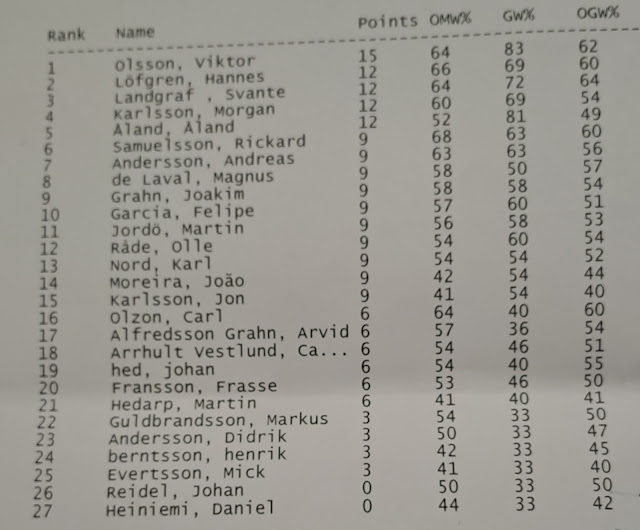 We started around 18.30 and the swiss was finished 23.30 so not too late. The scorekeeper said he hoped he could close the site before 03.00 and we did, the top 8 and we crowned the winner around 02.30. Svante managed to win this year again and the only one to have back-to-back BSK titles.


I also have a bonus list that I wanted to add. KungMarkus from Arvika has a sweet deck he is tinkering with. He really likes signed cards so if you have any reasonably priced cards that he is missing I'm sure he is interested in them :)

I want to end this blog post with something terrible that happened to a Norwegian friend. While travelling away home from UTC his bag got stolen on a train to Schiphol airport. It contained his whole OS collection. The Dutch community and others scrambled, and people have been kindly donating to rebuild his collection. Although this is a terrible event, I still think this community is the greatest to be in, it's more like a big extended family and the kindness and support that fellow players show is heart-warming. If you want to contribute or find out more about this event go to this Wak-wak post.

The magic fatigue is real, and I still must play a Legends-themed deck tonight at GG Bar and then the last trip of the year this weekend to [Redacted] but after that I'm going to take a break for a while. The first planned event of next year is Arvika 24-26th February. They will put on a massive tournament in central Arvika and mg has given them a shark to compete for. Hope to see many people from around the world at that event, if you want to know more you know where you can find me or any of the organizers.