First Inaugural The Open In London - England Belongs to Me!

Sometimes it's best to just go with the flow and go to quite unplanned to a small event with the intention of hanging out with some good friends and eat some food. Always lots of food.

My first time playing OS was 10 years ago where I knocked on Kalle's door and played a small five-man tournament with Kalle, Gajol, Stalin and another guy. My deck was utter trash, but I had got the power for vintage already and this was very much a work in progress. No deck picture but the exact list and that is better than the pictures I used to take back then. I finished 1-3 with the deck. 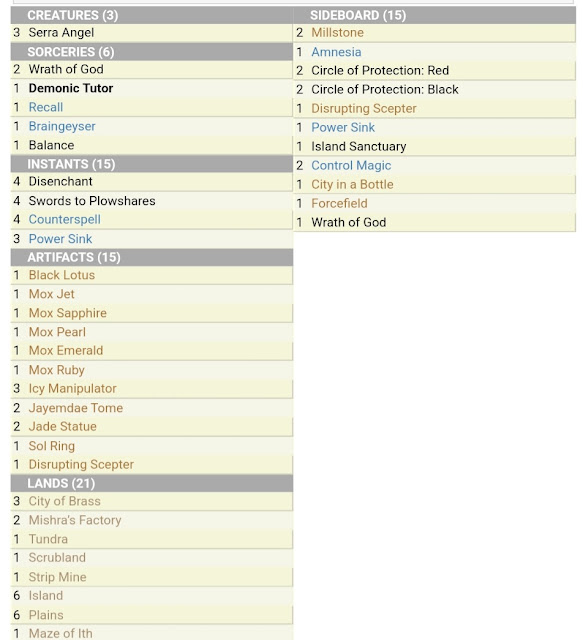 Participating in the brothers of fires first inaugural British OS Open was a good way to celebrate my first 10 years of playing old school. Brothers of Fire has been the premier OS team since forever and I have never had a chance to visit one of their events. I had arranged to stay with Brother Stebbo, so I didn't have to sit by myself at a hotel when no one else from Gothenburg wants to travel with me.
Travelling with RyanAir for the first time in many years was a pleasant surprise, swift boarding, and plenty of extra leg room for 65 SEK. There was a partial RyanAir strike but it seemed to mostly affect Spain, Belgium, and a couple of other countries. Also, there was a partial train strike in London but I didn't get affected by it and got swiftly to Camden via Stansted Express to Tottenham Hale.

As I arrived around 11AM and Stebbo was working until 5PM I decided to spend the day in Camden. In 2014 I spent half a day there and loved it. It's a great place to walk around, do some shopping, eat some good food and visit some pubs. Last time I was there it was in February so in June there is waaaay more people. First stop was to tick off fish and chips from my London list (the other was Indian food). Just Googled "good fish and chips in Camden" and came up with Poppies' 200m away.


I found several good record stores in Camden (no surprise) and got two British prog albums I've wanted for some time but haven't seen in Swedish stores. If you haven't listened to Renaissance - A Song for All Seasons I highly recommend it, the Camel record might be a bit weirder if you are not into 70s prog. The Oppressed - Oi! Oi! Music! is an album I have spent a lot of time listening to but not lately. I consider it one of the absolute best Oi! albums, maybe only second to Cock Sparrer's Shock Troops. I got some advice to visit the pub Black Heart, but it was closed so the pub World's End was my place to listen to some good metal and rock music.
After some food, shopping, and beer it was time to get to Brother Stebbo's place. Easily enough I found it and got greeted with beer and got to meet Stebbo's girlfriend. Didn't stay for long because we needed to go to Brother Jonas place over at East 17. Shane from Chicago Lords of the Pit was staying at Jonas place so a good international representation this evening.

A guy named Joe joined up for the barbeque, a new acquaintance for me showed up and was as expected a great guy. We drafted Jonas's cube "old school with some Timeshifted cards". I ended up with a trashy pile with some coin flip effects. I was unlucky with my Goblin Bomb and Goblin Bookie combo vs Stebbo. Not really, coin flips are shit. I'm not a big fan of cube unless it's my own cube, I'm more of a constructed player at heart. I liked that Jonas had changed some cards and made them more playable, for example my Raise Dead also had "draw a card".


I was very excited to play some Brothers Highlander. Apparently, I'm the only tournament winner in that format (shared with Blazer) as we won the 2HG tournament (edit: Pez has won a tournament called The Lady of the Mountain going 7-0 with a UR deck which we didn't know about when writing this post). It's not a tournament format and I hope more people will pick this up as it's a great format to play for us who don't like to grind our tournament decks repeatedly. I got to play Shane three times and managed to squeeze out wins in all games (avoiding a draw by Chaos Orbing a Divine Intervention with one counter left). I think Brothers Highlander is my favourite singleton format. After some games Jonas tried to get his Super Nintendo to work and it didn't so me and Stebbo just went home and got some Swedish sauna in the underground Victoria line.


I was extremely tired getting up at 04.30am and I think we got home around 02.30am and I had trouble sleeping so I was awake for 24 hours. The sauna heat from the Victoria line didn't help and some baby foxes sounding like a woman getting killed didn't help with me trying to sleep. I got up at around 08.30am and after shower and coffee I felt like I was ready for a new day. Even though there were some industrial actions (strike) we got swiftly to the site. On the way we meet Brother Jordan and Andrew. I thought was going to be an ugly basement with crappy tables and bad beer. Turns out Rule Zero more looks like a fancy bar than a nerd joint. Jordan gave me a pint and I ordered a variant of Full English Breakfast; day couldn't start better.

For the day I decided to play a variant of Beast Orb based on Björn "bjeagle" list from Ivory Cup. Ivory Cup was run as gentlemen's, so I had to fit in Mind Twist and Library of Alexandria. Björn also didn't run Braingeyser or Balance which clearly is a mistake, so I had to cut some cards to make room for these powerful cards. The list below is what I ended up with after trying some games on stream against Charles Klein and Koos Cramer.

Sadly, the tournament wasn't very interesting from a game perspective. I played against five different blue-white aggressive/mid-range decks with Savannah Lions (one of the decks had the Lions in the sideboard).
Round 1: 2-1 vs Matt
Round 2: 2-0 vs Andrew
Round 3: 0-2 vs Jordan
Round 4: 0-2 vs Francis
Round 5: 2-0 vs Patrick
I guess I will have to run this deck in another tournament as I feel I don't have enough data on it. The two matches I lost I got Mind Twisted in all four games. The most interesting thing happened against Andrew where I got an opening hand where I got to play turn one Guardian Beast, Chaos Orb and activate Chaos Orb on his Mishra's Factory for him to have an empty board and me having active Orb-Beast.

The tournament went by fine and with 17 players and a top 4 my 3-2 record was only good enough for a sixth place. Brother Stebbo and Brother Jordan ended up in the finals and Jordan coming out as the winner.

Every competitor got a Mox Platinum which is legal in Brothers Highlander (basically a Mox that gives every color) that was printed for Queen Elizabeth's platinum jubilee. Jordan got a trophy for a year; I donated an X-Files t-shirt which was given out as a community price and there was also a trophy awarded to Karl for best deck. The tournament participants also collected some good and needed money for London Inner City Kitties.

After my dinner I did an attempt to go for the marksman patch. I practiced earlier and did 50 flips in a row without a miss on the table (I didn't have a good flipping mat with me) and no missed flips in the tournaments. I ordered four sambuca shots and started flipping and started getting bad bounces and died at around 24 hits. It's waaaaaaay harder than it should be due to the stress of someone counting and the patch on the table. But hey, if everyone succeeded at their first attempt it would just be boring.
After some brothers highlander we drafted the "Alpha cube" which is basically a several year old holiday cube that is altered to look like Alpha. I always underestimate my draft decks and sadly I didn't take a pic of it. But I had Demonic Tutor, Imperial Seal, Yawgmoth's Will, Lion's Eye Diamond, Cabal Ritual, Seething Song, Wheel of Fortune, 3 Signets, Tolarian Academy, Brain Freeze, Tinker, Sphinx of the Steel Wind, Gifts Ungiven, Necropotence and Brainstorm.
Afterwards we went back to Jonas's place for a couple of drinks before everyone almost was falling asleep. Not much action after these two days.

Sunday was travel day, but we got to tick off the last box on my list which was Indian food (and cocktails). Jonas had booked a really good fancy Indian restaurant named Kricket Soho which I highly recommend. Both the food and cocktails were exceptional and there wasn't a single item I didn't like.

After some discussions about JFK, they left me at Piccadilly underground for the sad journey home (wish I could have stayed longer). After some delays I was home Sunday night at 01.00am having to go to work on Monday morning.
I got some sweet stickers from Shane with me home, double Mox Platinum and then I forced to guys to sign some cards for me as I don't like that I have so few cards that are scribbled on. When I'm older these will be a fun way to remember past events.

I recommend everyone to visit an international old school tournament. Without these events it's very doubtful if I would continue playing old school. There were no mad wives or kold dinners the whole weekend. I hope to go back for the second inaugural the open.