When it comes to really old oldschool I always think about BSK. Back in 2012 I played my first BSK (and my second real tournament). BSK has been running every year (with the exception of 2020) since 2009, longer than pretty much everyone has been playing oldschool.

During the years BSK has been arranged in several different "venues", when I started it was played in two hotel suites and people played on beds, floors etc. and it's a wonder that everyone didn't sustain serious back injuries from those tournaments. Around 2014 we started playing at the local gaming convention BSK (Borås SpelKonvent) but in a separate room, that year we were around 60 players so playing in the hotel suites was not possible.
From maybe 2015 someone decided we wanted to be part of the ordinary BSK gaming convention (arranged by Armagedon). The magic part of this convention is arranged by SvenskaMagic, a Swedish gaming association to promote Magic playing and support and arrange tournaments. The focus on BSK is the "eternal" formats so there was not only old school but the Swedish nationals in Legacy (106 players won by two-time shark winner Martin "Fluffy" Lindström) and some smaller vintage and premodern tournaments.
The tournament started around 7pm after waiting for the swiss of the Swedish legacy nationals to finish. As already mentioned, Fluffy made top 8 and also Kalle Nord with his "2017.dec" so two of the attending sharks missed the old school tournament but we got 19 sweet players in the tournament. I decided if we were 17+ players we would play 5 rounds of swiss followed by a top 8, going back to the old standard. In 2019 we tried playing three rounds of swiss, followed by a dinner break and then three more swiss rounds without a top 8.

I feel this was more of a "gathering" than "Magic" tournament as most people had not seen each other for two years. The meeting points in Sweden are generally BSK, n00bcon and the Arvika tournaments. Except for meeting Landgraf and João I haven't met any of these guys IRL since BSK 2019. Even if all the old school players on site didn't play you still had a lot of people to hang with everyone during the day. As usual the SvenskaMagic/Mindstage dream team of William Ljungberg and Flax was on site for trading, buying, and selling but this year Mitja Held's Sky Guild joined so there were plenty of possibilities to score some deals.
The most interesting play is when I faced mg, he had a Tormod's Crypt in play against my Twiddle Vault and he started taking a picture bragging how good the Crypt was. When he was taking the picture I played a Regrowth and asked "Ok?" and mg replied "Ok". I quickly took up my Twiddle and he was like "wtf?". I don't power game in oldschool but I always think it's ok when playing against mg :)


First place gets a signed The Fallen but I wanted there to be some other prizes, so I got four additional prizes. 9th place got a Beta Howl from Beyond, 13th place got a Cuombajj Witches and last place got a The Wretched. Then we had a money card raffle for all the players with an Unlimited Armageddon (because Armagedon arranges the convention) who was won by Andreas Jansson. I think it's ok to have "money", prizes but they should not be awarded to people with the highest finishes and rather be awarded by raffles or for something else (non-powered decks is another example). It's ok to spike, but you should not win valuable prizes for spiking.


The finals were between Morgan Karlsson on Troll Disco and Svante Landgraf on RUG "with no Kird Apes and Counterspells but with Scryb Sprites.dec". Svante running so hot coming back from another victory last weekend. Also note that Svante beat me in the quarter finals last weekend and this weekend.

So, Svante won again, no surprise there. A couple of years ago he complained having only won a small 10-person tournament, but now it's at least three tournament wins with different versions of RUG. He has a good record of knocking me out in tournament top 8s. I haven't listened to this ATC episode yet but it's him discussing RUG with Mano. 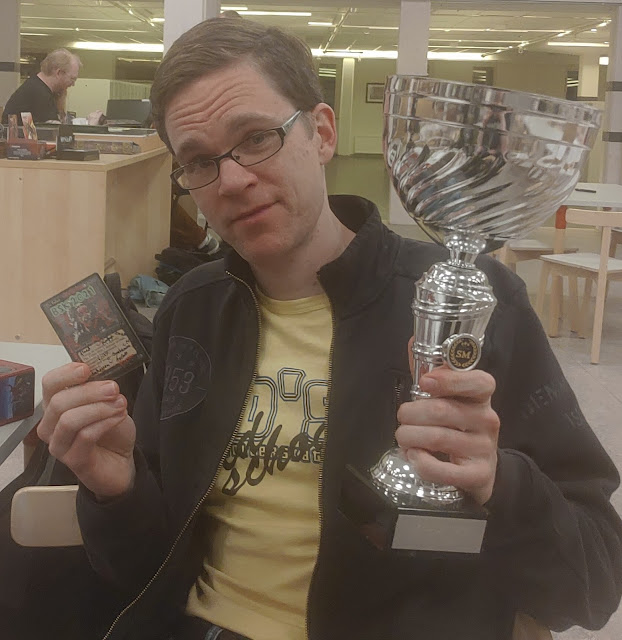 After threatening the top 8 players with not being able to play next year I managed to get all 8 deck lists. I think we have a duty to preserve these deck lists (try to find deck lists from 10-year-old tournaments, even if you find them, they tend to be of very bad quality).

I feel like the only thing that's good with Magic prices nowadays is we have come full circle and gone back to trading instead of just selling and buying cards for cash. I think trading is one of the things that makes oldschool oldschool. I traded with several players, and both stores this weekend.

Well, that was it from this year's BSK. Next "public event" for me will be the Urborg Raccoon festival, hope to see some of you all 10 readers there. Maybe will try to fit in some private events and hopefully some local oldschool before that.