Showing posts from September, 2020
Show all

LobstercoM got a visit from The X-Files 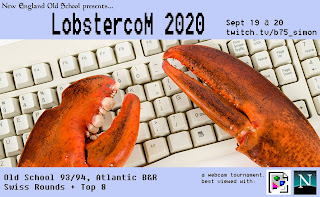 I have never visited the United States and I had plans to do it this year, LobstercoM probably was my top choice to visit as it is on the East Coast. But as you all know the global pestilence stopped that from happening. At least we could get a sweet online tournament weekend instead.  The tournament This has to be the best tournament poster ever. And no, there is no human teeth in this picture. LobstercoM is a tournament founded by the New England Old School MTG and mainly organized by Dave Firth Bard. The schedule was four exhibition matches on Friday, the swiss rounds on Saturday and the top 8 and raffle drawings on Sunday. Everything is streamed with commentators, wow! this is a full weekend of entertainment for free. Friday night was streamed by Rich Bourque  with Dave Firth Bard and Mike VanDyke as commentators. It featured two matches of Atlantic between a couple of heavyweights in the format (and even some duels in best hair on stream) and apart from that a feature of the forma
2 comments
Read more 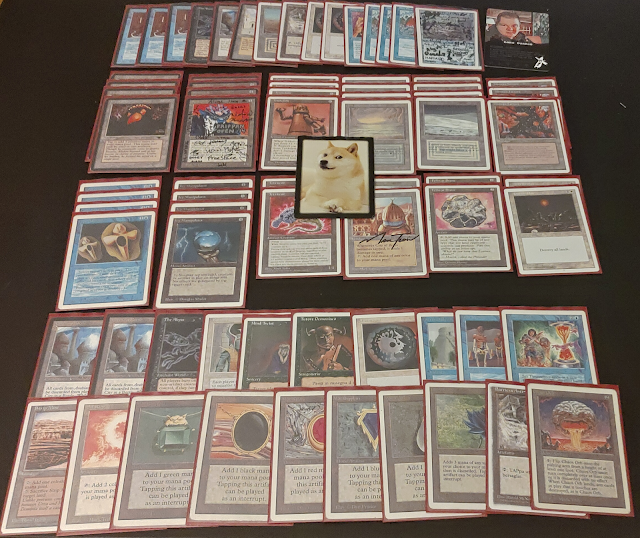 August was a wild month with four leagues played so a lot of matches (27) with four different decks, if you add up my Premodern league it is 33 matches to schedule in about three weeks. At least after this post I'm up to date with all my decks and probably will keep it to once per month, a bit depending on how many leagues and one-day tournaments I participate in. NEOS Monthly August - Top 10 (72 Players ATL) I really had to claw through a 4-2 victory with this busted deck, since NEOS was 10 groups 10 players reached the knockout rounds. My losses in the league was a mirror match and some Lauter.dec splashing green. I prefer the white shops to the red version. Wouldn't really change anything to this list. ODOL August - Top 8 (59 Players SWE) I finished the group stage 5-1 only losing to a BW Deadguy Ale attacking me 7 times with a unanswered Hypnotic Scepter (that's 7 card and a lot of life loss with a Ivory Tower in play). I got destroyed in the quarter finals against a GW
1 comment
Read more
More posts